The year was 1966 and I was working at my first job in Canada. My commute took me from Scarborough to Front Street in downtown Toronto.

I was a recent newlywed and a new immigrant, but once I learned the lingo and phrases of Canadians, I settled into my job as a switchboard operator. I’d been in my new position a few weeks when a gorgeous redhead entered the office. She came up to me at reception and asked for the boss. She informed me she was starting that day as the company president’s secretary.

Sandra and I became instant friends. Toronto born and bred she had traveled to California for a year to find herself. To me, she was glamour personified. I adored clothes and cosmetics so we had much in common.

I was introduced to her family and her mother, Bertha, who became a very important person to me over the years.

A few months into the job we received formal invites to the company Christmas party. Yes, they did that in those days. It was to take place at the King Edward Hotel, aka King Eddie. Conveniently, only a short walk away from our office. We had once or twice dropped into the bar for a drink before taking the subway and bus to our respective homes. Yes, it was the sixties. We were finally allowed to go to a bar by ourselves without causing comments!

Sandra caused quite a stir that night in December. We were photographed sitting with others from the office, but Sandra was the Belle of the Ball. Sophisticated and smiling to all, she wore shiny disc-like earrings. Her red hair is in a Vidal Sassoon bob.  We shared those clip-on earrings over the years until we retired them as being out of date.

Sandra met her future husband at my twenty-first birthday party. Both our husbands were with the Metropolitan Toronto Police Force, so we spent many evenings together when they worked evening shifts or weekends. We lived on the same street and then we both bought a condo apartment in the same building, on the same floor.

Our relationship was pretty tight as we went on vacations together. Over the years, we shared many a meal. And not just meals! Sandra and I would exchange clothes, and even shoes, in addition to our favourite pair of earrings. But fate would intervene and life changed for both of us.

I began a family, having my first son in 1971. Sandra started her journey with a disability that would last the rest of her life.

MS, or Multiple Sclerosis, was diagnosed and her life changed forever. There were many adjustments to be made. She gave up her job and tried to deal with people who assumed she was drunk with all her lurching about.

There were a few years of remission when she attempted snowshoeing with her husband, and a trip to Greece with her mother, where a climb up the Parthenon became a favorite memory.

Sandra had a progressive form of MS and it eventually crept back with a vengeance. She graduated from walking with a cane to a walker, and then a scooter. She tried everything to retain her independence.  Working alongside folks from her church gave her a feeling of accomplishment, with an attitude that surprised everyone. Her motto: I was dealt a lemon, so I’ll make lemonade. She had an infectious smile and made loads of friends in those years.

She bought a timeshare in Bermuda and traveled on her own with the help the airlines provided.  MS was not going to define who she was as a person.

Time continued its progress. I had two more children and moved away. There were a few years I didn’t see as much of Sandra. I had a full-time job, three children. My life at that time meant I  was a good hour's drive away. But we always kept in touch. 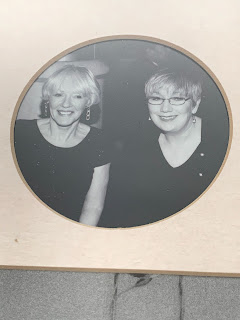 A few years after I moved she asked me to join her on a cruise to Alaska. Oh my, what fun we had. She used a walker and would sit on it while I charged down the corridors. Getting her onto a bar stool for our daily martini before dinner was a challenge, but there was always a handsome steward willing to hoist her up. They carried her off the ship in her wheelchair so we never missed an excursion. Even onto a catamaran to see the Orcas.

It was a magical trip. Neither of us wore the earrings on that trip.

Years later, Sandra sold her apartment and moved to a retirement home. We were both widows by then and I visited every few weeks. But the drive across Toronto was not to my liking so I suggested we find a location nearer me. I found an assisted-living community within a 10-minute drive from me so we were all set. She became an expert at operating a motorized wheelchair and had her independence back, navigating herself around.  A Wheel-Trans bus took her to a  shopping plaza that had everything she needed. Bank, grocery store, clothing boutique, drug store, and liquor store. In addition, I was told, “There is always the shopping channel!!”

She settled into the new place, and before long, had made new friends. I visited weekly.

We managed the first wave of Covid. Until she called last August of 2020 to say she had found a lump in her throat. I called the nurse and asked them to get her to the hospital immediately.

The unexpected diagnosis hit hard. Inoperable throat cancer. Subsequent tests showed it spreading. Sent straight to palliative care for the next three months. The hospital did a wonderful job caring for her.

So you are wondering … what about the earrings?

The hospital provides a lovely, and welcoming, wide-open patio where patients and their families can gather.

On a warm and sunny day, and with staff assistance, I helped Sandra into a wheelchair to get

her outside. She was allowed anything to drink or eat so I had brought her favorite wine, in two water bottles. Easier to drink out of. Then I brought out the earrings. 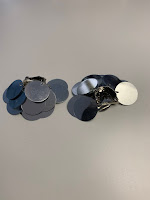 They only cost me five dollars.”

After fifty-five years they don't quite hang the way they should. I'll donate them to a museum. Maybe as antiques they will have gone up in value! 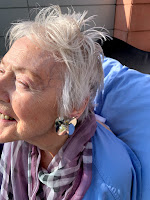 I clipped them on her and she beamed. I took her picture. We finished the wine and went back inside. She said it was one of the nicest afternoons she’d ever spent.

I’ll treasure the earrings always, to remind me of so many good times.

No, I’ll never wear them again. Clip-on earrings are a form of torture. The things women will do for fashion!

Sandra died on November 9th, a day of her choosing. Her birthday. How she died was also her decision. She chose the MAID program. Medical Assistance In Dying. It was a very brave thing to do and she was at peace with her decision.

Pam, you are truly blessed to have had such a wonderful friendship. What beautiful memories, some no doubt bittersweet, you can carry in your heart forever. xoxo

Pam, what a beautiful tribute of friendship and love for your beloved Sandra. Wonderful to see her photo. She truly was a beauty! You are her Life Sister, something all women cherish. Thank you for sharing pieces of a life well lived, despite the odds. God bless you! ❤