The Author Behind the Dan Connor Mystery Series 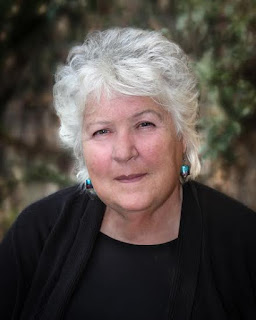 Jamie Tremain is pleased to highlight R.J. (Rachel) McMillen on the blog this month. We are eagerly anticipating the release of her third Dan Connor Mystery on May 17 – “Green River Falling” 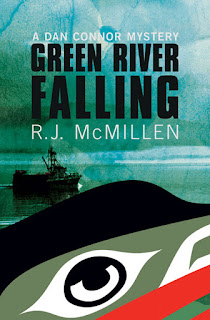 Set along BC’s remote central coast, Dan Connor is asked, by his friend Walker,  to discover the truth behind the brutal murder of five pipeline employees. A Haida man is suspected of being the one responsible, and may also be connected to the disappearance of a journalist. This is Walker’s friend and he insists he is innocent. Dan investigates, Walker goes missing, and then Dan is attacked and left for dead. Can no one escape the path of the real killer?

Rachel McMillen is a nomad of sorts who divides her time between Canada and Mexico. Born in England, and raised in Australia, she spent 3 years working in Greece before meeting her Irish-Canadian husband (they were married in India) and moving to Canada to raise her family. She and her husband spent many years exploring the beautiful west coast of British Columbia, on board their sailboat, Maquinna.

She has written numerous magazine and newspaper articles, as well as a travel guide to Baja California,  Mexico, titled: "Driving Baja".

Welcome, Rachel, to our Blog

JAMIE TREMAIN:
The spectacular west coast of Canada is the setting for these stories, and you have a current running through each book, the environment. This must be important to you because you’ve ensured its woven throughout. Can you provide our readers with a little background on why you decided to make this an integral part of your story telling?

RACHEL:
Well, first of all, I think the west coast of Canada is one of the most beautiful places in the world, and yet it is mostly unknown, even to the people of British Columbia. Using this area as a backdrop for my stories gives me the opportunity to introduce this magical place to those who have not experienced it. Secondly, it provides me with the opportunity to indulge another one of my passions, which is sailing, and that, combined with the environment, helps me weave the twists and turns of my plot.

JAMIE TREMAIN:
After three books, and I believe a fourth is in the works, do you have a recognizable routine for your drafts? Are you more prone to get the plot down first, or develop character profiles?

RACHEL:
I start out by putting my main characters, Dan Connor and Walker, into a particular location, and then I add a current political or environmental issue and develop both plot and characters to go with that. While I always have a plan for where I am going, the details get filled in chapter by chapter. New characters often seem to appear along the way!

JAMIE TREMAIN:
How long have you been writing?  Which is not the same thing as how long since you were first published. Jamie Tremain is well aware of how long it can take from the first draft to a contract.

RACHEL:
I have to say I’ve been writing all my life. In Grade 10 I won a state-wide essay contest (this was in Australia), which came with a prize of $50 – a seemingly enormous amount in those days. I continued on to publish various articles, poems and short stories in the Melbourne University newspaper and the Literary magazine the Arts Department put out, and then when I moved to Canada I started contributing to magazines such as Pacific Yachting and B.C. Outdoors on a regular basis. Writing novels just seemed to be a natural progression.

JAMIE TREMAIN:
You are a member of CWC. Are there any other writing/author organizations you belong to? What are benefits to belonging to a writing association?

RACHEL:
I am also a member of The Writers’ Union of Canada as well as the Federation of B.C. Writers. Each of those serves a different but equally valuable purpose. The Writers’ Union is the most political, and it works to protect not only the rights of all Canadian writers, but also to keep us informed of what’s happening in the world of publishing, copyrights, contracts etc.

The FBCW is really Writers helping Writers. It provides workshops and organizes events where writers can improve their craft and share their stories and it does a great job of letting members know when there are opportunities to get together. Writing is a lonely occupation, and it is easy to become isolated. Organizations like this help ensure the free flow of ideas and knowledge.
Crime Writers of Canada is, of course, specific to those of us that write mysteries, and it not only provides me with a way of promoting my work but it also hands out the Arthur Ellis awards – the Oscars of Canadian Crime Writing!

JAMIE TREMAIN:
By the time you’ve completed the last page of the last chapter, is there something you hope the reader feels about the story or characters?

RACHEL:
Oh, yes. I think more than anything, I hope the reader feels that he/she has been involved, not only in the story itself, but also in both the environmental and cultural setting. I had one reader tell me that she was actually “a little bit in love with Dan Connor,” and I thought that was wonderful because it meant that Dan Connor was real to her.  Another asked me if I was ever going to find a woman for Walker to marry because he deserved to be happy, and again, I was delighted by the question (although the answer is ‘probably not’). And I think the greatest compliment I have ever received, and one that gave me an enormous amount of satisfaction, was when a Haida man stood up at the end of a reading I did on Haida Gwaii, and said that I was one of the few non-native people who, in his words, “got it”.

JAMIE TREMAIN:
Is there anything about this third Dan Connor story that sets it apart from the previous two?

RACHEL:
I think that over the course of the three books, each has become more tied to current events and to environmental and political issues. All of those things are certainly featured more strongly in Green River Falling. The plot is loosely tied in to the northern pipelines and the environmental protests that have gone along with them, and there is reference to the Residential Schools and their legacy. Of course there is also reference to the history of Cow Bay, and to a certain café that sells the most amazing cinnamon buns!

JAMIE TREMAIN:
You’ve also mentioned that you are careful to check and verify cultural references in your books. Is this done before the story is finished, or do you wait until it’s complete?

RACHEL:
Before I start to write a book, I visit the place(s) I want to use for the setting (usually places my husband and I sailed to in earlier times). While I am there, I explore the area and learn as much as I can about the culture of the folks that live there. Then I find someone from the local band who is willing to edit the story from a cultural accuracy point of view. For the first book, Dark Moon Walking, I was blessed by meeting a man who was both from the local band and an ex-RCMP officer. With Black Tide Rising, the son of the only remaining family on Nootka Island (who happens to be a well-known carver), agreed to work with me. For Green River Falling, a Haida weaver, who also works at the Haida cultural centre as a cultural guide, was my cultural editor. Most often, I will send those folks one or two chapters at a time, and then follow up with a bigger section once any necessary changes have been made.

JAMIE TREMAIN:
Jamie Tremain creates in depth profiles for our characters, but not everything we know about our character makes it into the story. Is there something about Dan Connor that your readers might not be aware?

RACHEL:
Dan Connor is the mirror-image of Walker. He ‘s white, and he started out as a carefree, confidant young man who had the world by the tail when he joined the RCMP. He did well, got promoted, met a girl, fell in love, got married – everything in his life was perfect, until it all fell apart. His world collapsed and he tried to lose himself in the maze of islands that form the west coast of Canada.

Walker was a Native youth who was disenchanted with his village and his culture, found his way to the big city, met up with the wrong crowd, and got into trouble. When things go terribly wrong for him, he goes back to his village, in that same maze of islands, in order to find himself.

It is the interplay between these two that forms the backbone of all the books.

JAMIE TREMAIN:
Do you have any plans to move away from a series and write a stand- alone mystery, or another genre?

RACHEL:
I am currently writing the fourth book in the series, Gray Sea Running, and I have been invited to visit the Makah in Neah Bay, Washington to research the setting for the fifth, so the series will continue, but I have also started a Literary novel, which is about a young Afghani boy who is orphaned in the war with the Taliban, and who is found by a medic at the Canadian Forces base in Kandahar.

JAMIE TREMAIN:
When you’re not writing, or travelling, how do you like to spend your time?

RACHEL:
Well, there’s not a lot of time left after all the writing and travelling, but I do love to join friends for a coffee in the park, and I walk my dogs every day, and if I can squeeze it in, I like to weave on the lovely 8-harness loom I keep set up in the spare bedroom!

Thanks, Rachel, for being our guest today. We wish you much continued success with Dan Connor and can’t wait to read Green River Falling.

Reviews for R.J. McMillen
“McMillen is a solid plotter and there are no extraneous clues. What really makes Black Tide Rising zing is her love for the scenery and setting. You can almost smell the salt air and feel the trees. That, along with some interesting characters, makes for a terrific weekend book. This is a perfect cottage hostess gift.”  Margaret Cannon, Globe and Mail

“I love the idea of a mystery series based right here in BC. This first volume was a great start. The author is obviously well-acquainted with the coastal waters of the Inside Passage, and her vivid descriptions of the natural landscape were enthralling.”   Joanne

And for Black Tide Rising
“This was a pretty good mystery/ thriller. I loved the location: Nootka Island on the isolated West Coast of Vancouver Island. The story mixes in parts of West Coast Indian lore, RCMP activity and the BC criminal elements. The main characters doesn't ride to the rescue all the time but actually requires and gets lots of assistance. I really enjoyed the geography aspects of the story. The place names keep me looking at maps and visualizing what was there. Excellent read!”  - William

Be sure to watch for Green River Falling due to be released  May 17 2016 from Touchwood Editions.
And you can follow Rachel on Facebook   https://www.facebook.com/DanandWalker/