In late July Liz and I had our monthly chin wag to sort out the problems of the world, but mostly we plot and plan our work in progress, namely book number three, 'Beholden to None'. No writing is done that day as we catch up on our lives and add to our storyline. Characters change or new ones appear as we build the story and leave ourselves with a schedule to work on.

My schedule was a little different from Liz's as I was traveling overseas. I left her holding the reins while I flew off to England to quench my homesickness. As my siblings live in different countries I planned my route. First Peterborough, about an hour out of London to visit sister #1 for five days. Then a flight to Amsterdam to see sister #2 for four days and then another flight to Edinburgh to see my brother and the rest of the Blances. Planes, buses, taxi's and walking for miles as I navigated with my suitcase and backpack. As a woman of a certain age, (old), traveling alone is not for the faint of heart. I thought a backpack would be a good idea but I forgot I was not seventeen and hitchhiking as I did back in the sixties.

My adventure began at Heathrow Airport. At least 500 people in front of me to go through security and Border patrol. No exaggeration. I arrived at nine expecting to catch a train at 11.30pm for Peterborough. Two hours later, hot and tired I made it to the train station, picked up my ticket. Walked another two miles to find the platform and watched the train pull out of the station. Did I mention it was still 28 degrees? To add insult to injury they had the nerve to ask me for 30 pence to use the necessary facilities. This is common in Britain. Travel agents take note. Keep change on you.
I waited in the middle of the night for the next train and arrived at my sister's at 3.15am. Had a lovely visit, shopping, and eating, visiting the cathedral, did I say eating? A couple of G & T's and lots of gossip and reminiscing. Just what I needed.


The next step of the journey was a short flight to Amsterdam. It took longer to get to the Airport than the flight. Taxi to train, train to Nottingham and taxi to East Midlands airport. On this leg of my journey, I was not expected. My sister was having a surprise party for her husband so I turned the tables on her and told her I could not attend. I mean, who travels from Canada to The Netherlands for a party? Well, apparently I do. I checked into a hotel for four days and visited with her friend. Showed up at the party. Wish I had a picture of her face when she saw me there. Lots of beer, wine, gossip and meeting friends. The weather was more comfortable than in England. Next day another party at Sis and B-I-L's home to celebrate their 45th wedding anniversary. Loads of neighbours and of course the grandkids. A short visit but memorable.

The next day was Sunday and I left on the last leg of my trip. Are you falling asleep yet? I left Almere by train to take me to Amsterdam. Edinburgh, my hometown, here I come. I don't believe them when they say they had wonderful weather this summer. So why is it raining now and windy and cool? I really expected no less. Was met by the family who turned over a flat for me to stay in right in the center of town. My son and D-I-L arrived the next day. More eating, drinking, visiting and walking. This time the walking was up hills and over cobblestones. How did I ever do it in stiletto heels when I was... younger.

The Internation Festival/Tattoo and the Fringe were in full swing as was the Book Festival where I spent a couple of afternoons. Up to 1000 authors from around the world were in attendance at different venues throughout the city. Readings and book signings galore. I only bought one book as they are too heavy to carry back. Ann Cleeves  Dark Water, one of her books from the Shetland series. I could walk to this festival in Charlotte Square from the flat I stayed in. Also, my favourite stop was at Waterstones bookstore overlooking the castle. Most civilized place as they serve Prosecco, Gin and tonic, and coffee. Gin and tonic appear to be the drink of choice for many young people in Britain today. Old ones too. 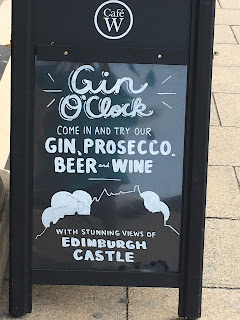 I had my fill of a few tourist traps like the Royal Yacht Brittania, Interesting. The Caledonian Hotel There is a story here, walks on Princes Street and of course a visit to Marks and Spencers. A drive to St Abbs on the coast with my nephew was, shall we say ..bracing. Felt like gale force winds propelling me along but really was most enjoyable.

It was wonderful to see my family and visit familiar haunts but its time to go home. Home is Canada where my children and grandsons stay. Did I do any writing while away? No, I did not. Did I get lots of ideas? Yes, I did.

The trip back was not without its moments. At the airport for 6am. Flight delayed and we did not leave until 1pm. I was spitting nails by this time. Lots of time to people watch but most were in the same position as I was. Cest la vie.

Watch out, Liz. I'm back and raring to go. Edits for book two Lightning Strike are due soon so a busy fall is on the agenda.