Another three day weekend is history, except I have the sore muscles to remind me how much gardening was accomplished – my brain can remind me of how much is yet left!  It is satisfying though to see some order where before there was an overgrown mess.  I know periwinkle’s quite pretty, but the stuff does grow like a weed and needs constant reigning in, as any recalcitrant child.   The sky now is overcast and hopefully some promised rain will give a boost to the newly planted flowers and shrubs.

The countdown is now on for Bloody Words – ten more sleeps.    Jamie Tremain will have a manuscript evaluation of Body Perfect while we're there and hopefully our skill and ability have grown considerably since the last Bloody Words we attended in Ottawa.

Last week I got out my NetBook, for something trivial I’m sure, and discovered I couldn’t get the password to work. Now, anyone who knows me should know how annoyed and disbelieving that left me.  I never forget passwords.  Between work, writing and other online sites, passwords do accumulate and I've a pretty good system in place to keep them straight and provide hints should they be needed.  So I was pretty much peeved off that I couldn’t find the right combination to unlock my NetBook-  which will be called up for duty at Bloody Words.

Off to my neighbourhood Staples I slunk to shamefacedly admit it appeared I couldn’t remember my password. Ah, the knowing looks that passed between the tech staff.  “You don’t understand,” I wanted to explain, but even to my silent ears I knew the plea would have been heard countless times before. I wouldn’t have believed it either.

“We’ll see what we can do, but it may mean re-formatting the hard drive.”
“Whatever it takes,” I said with a smile counting imaginary dollars in my head.

Picked it up after work today –  password free, no charge and no reformatting thankfully. Came home, booted it up.  Lovely.  Then wanted to send a test email to ensure everything was working.  My QWERTY had disappeared to be replaced by some random foreign language!  Letter ‘o’ was now a 6, the ‘k’ a 2 and so on.   The light dawned...it wasn’t that I didn’t remember my password – but not being able to see the keys pressed on the screen I had no idea what I was typing wasn’t what was showing up!  Vindicated!

Vindication was step one, restoration became step 2.  Searching ‘help’ on Windows proved fruitless, so I turned to my trusted font of all knowledge, Mr Google.  After a few intimate moments with him, the answer was revealed.

Fn key!  (Seems appropriate somehow)   That’s the Bluetooth Fn key – it was locked and in that state substituted QWERTY keys with other characters.  Fn + NumLock restored my keyboard.  Relief!

So now my little NetBook is all ready for Bloody Words and next week is vacation from work, so that should give me plenty of time to get ready as well – overpacking here I come.

We’re also awaiting results of the Poisoned Pen Press contest on May 31 – wouldn’t that be a great way to start off Bloody Words? Whatever the outcome – Pam and I are geared up to be positive and relentless in our pursuit to see Jamie Tremain on a bookstore shelf near you! 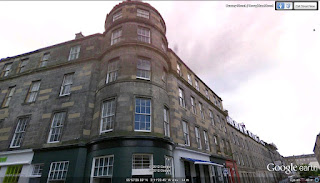 This is the tenement where I grew up; 38,Broughton Street in Edinburgh,Scotland. We lived on the third floor with the second turret overlooking the Firth of Forth. Seven of us shared six large rooms, two with marble fireplaces, a stone floor in the kitchen that was both a dining room and a place for drying the laundry on the 'pulley'. A large black hob kept that one room warm, our legs toasting ( called fireside tartan) trying to keep warm. One toilet and no bath. No washing machine; that job was for Saturday mornings when my mother and sister and I would carry our baskets of laundry to the public wash house called the 'steamie'. Two of the rooms were completely round, even the doors were beveled. At that time the brass pulls and name plates were in evidence at the main door and they would jangle all the way to the third floor as we opened the door to visitors. Mid century security!When I lived there before immigrating to Canada the stairs to the third floor were very worn and the 'close' or hallways still had gas lighting.

These buildings are part of the New Town of Edinburgh (1765-1850) as opposed to the Old Town which was 16th -18th century that included Edinburgh Castle and Holyrood Palace the Queen's home when she is in residence. The architecture is neo-classical /Georgian period. Both the old and the new town are now Unesco World heritage sites.

My father rented this flat for the princely sum of 10 shillings a month. Mind you, there were absolutely no amenities and pleas to the landlord to fix the holes in the roof went unheard. That's when the wallpaper would start slipping off the walls after it had rained. Edinburgh is known for rain!  I believe these flats now sell for upward of 300.000 pounds. I'm sure they've added a bathtub and some central heating!

What had me on a nostalgia trip was researching Sir Arthur Conan Doyle author of Sherlock Holmes. When travelling Google earth to find a picture I was reminded of my own home that was a five minute walk from Picardy Place. I must have past the house hundreds of times but never registered the significance. 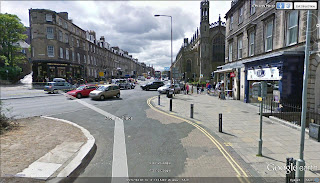 The Conan Doyle pub and St Paul's and St George's church where I  married in 1966.

I'll tell you some more stories of #38 another time.

Slowly getting into our new book and gearing up for the Bloody Words conference at the end of the month.
Enjoy this wonderful spring weather and the Victoria day holiday.

A good morning spent with Pam today outlining and getting to know the new characters for our next adventure with Paul and Dorothy.  We've learned so much since we put together Madelaine – Shadows & Light.  Being organized this time will hopefully keep us on track and avoid unnecessary re-reads.  I've put together a spreadsheet  to track character biographies, events, names and places, etc..

We spent a good deal of time today rounding out the main characters and getting a feel for them.  Pam ‘interviewed’ our protagonists Paul and Dorothy to better understand their likes and dislikes and more of what makes them tick.    As well we think we’ve decided on the victim(s), crime and method for this tale.  What fun to be back at something new!  Now we get to start putting it all together.

It’s likely the next time we meet up will be at Bloody Words – seems it’s just around the corner now!

Tonight we’ve been promised a supermoon – the biggest and brightest full moon of the year  - you might feel a little crowded as it will only be about 357,000 km from earth  - about 30,000 km less than its average distance at any other time.  This means it should appear about 16% larger and 30% brighter than other full moons.  Where did I put my measuring tape???  Not being one who stays up very late, I’ll try to catch a peak before hitting the hay in a couple of hours.

Supermoon or not, I have several pages of handwritten notes from today which need to be transcribed to the aforementioned spreadsheet, ideally while I still have the excitement and enthusiasm to go along with it.

Enjoy the rest of your weekend.


This is Mental Health Week.
Last evening I attended an event at the Burlington Convention Centre for Mental Health Awareness in support of SUPPORT & HOUSING HALTON and T.E.A.C.H...( which provides peer support throughout Halton for individuals 16 years and older who live with or have lived with mental health challenges).

This was a cocktail, dinner and silent auction affair and as my microphone/ receiver gave up the ghost before I left home I was not sure if this would be a waste of time for me. However the audio arrangements were excellent and I had no problem hearing everything they had to say. Wine was at the table and a cash bar was busy as we were introduced to the Mayors of Oakville and Burlington. It’s always good to have their support at these events.

The first speaker was Lorraine Sommerfeld who is a columnist and humourist I greatly admire. She writes weekly for the Globe and Mail and the Hamilton Spectator with regular spots on CHCH TV's Live@5:30.  Mother of two teenage boys I have always enjoyed her humour and hearing of her escapades.

The second speaker was Margaret Trudeau who is a celebrated Canadian and Mental Health Advocate.  Unless you have had your head in the sand for the last 30-40 years we have all heard the stories of Margaret’s life with Pierre and her partying with Mick Jagger. This mother of five, writer, advocate for mental health recovery and excellent speaker made more than a few people sit up and listen in the crowded convention hall last night.

What do these two women have in common?  They both suffer from the disease we know as Bipolar disorder or Manic- depressive disorder as Lorraine prefers to call it. She says, ‘it’s much more colourful and descriptive’. Both admit to being drama queens which is part of the outcome of the manic phase. They were both bluntly honest with the grace and fortitude that they’ve needed to cope with this disease and always being thought of as “different”.
Margaret gave a good account of how this disorder manifests itself, including her own struggles coping with it throughout her life.  Lorraine and Margaret are survivors and deal with everything in life and with their disease with a great deal of humour. A lesson  for us all.
We wish then well as they embrace their recovery.


Margaret Trudeau’s third book “Changing my Mind”  can be purchased at your local bookstore.

Check out Lorraine Sommerfeld’s two weekly syndicated columns. Motherlode and you can reach her at http://www.lorraineonline.ca/

All in all a good night. Very good dinner, excellent company and great guest speakers.