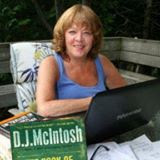 Today on Jamie Tremain we are very pleased to speak to D.J. McIntosh (Dorothy), who has recently launched the sequel to ‘The Witch of Babylon’ in her Mesopotamian trilogy The Book of Stolen Tales. 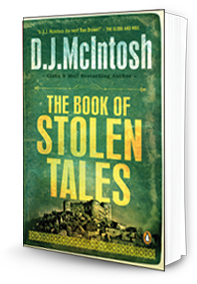 New York art dealer John Madison purchases at auction a  rare seventeenth century Italian book of fairy tales. Before he could deliver the book to his anonymous client he is robbed by a man claiming to be the author.
So begins his journey to find the book. He travels from London to Naples encountering many obstacles along the way. Immersed in the strange world of European aristocracy and rare book collectors he ends up in Iraq where the dark origins of familiar fairy tales appear to come alive around him.

Pam: Thanks for being here Dorothy. I don’t want to give too much away. I hate spoilers.
Your debut novel ‘The Witch of Babylon’ garnered many accolades from your peers and readers everywhere. 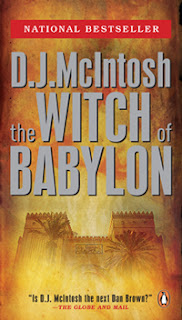 “A book so good, everyone should buy it twice.” –National Post
One of CNN’s “Six Most Enduring Historical Thrillers”
‘Published in more than 20 countries.’ Numerous awards including the Arthur Ellis award for best unpublished crime novel and a Globe and Mail national bestseller.

How hard was it to keep up the momentum of that success or had you started writing book number two before you published the first?

Dorothy:
I hadn’t begun The Book of Stolen Tales when The Witch was published, and while it took me eight years (on and off) to write The Witch, I had only one and half years to complete the second novel. With all the promotion requirements for the first one, including its publication in a number of countries, writing the second one was a tough haul. I especially find first drafts excruciating. Once over the first draft hump, I love the editing process. All that said, I loved writing parts of Stolen Tales and think it’s a better book than the first. I hope readers agree.

Pam:  It’s obvious from the content of these books that a tremendous amount of research went into the writing.
What is your writing process? Are you very disciplined?

Dorothy:
I am the most undisciplined person I know! As a result, for the last year or so, I’ve done very little besides writing Book Two and promoting Book One.

Pam: You live in the big city of Toronto with all its distractions; but in summer, for four months you take off to your cottage to my favourite part of the province, Lake Huron. Where do you get the most work done? Deckchair and sunsets, or the atmosphere and noise of the concrete jungle?

Dorothy:
I seem to get much more done at the cottage for kind of a funny reason. I don’t drive. That means it takes a lot more effort to indulge in the distractions of going into town. I have a long bike ride or have to call a taxi. I love sitting out for hours on end on my back deck writing late into the night. A few days ago however, I looked out my window to see a bear on my back deck so I’m now wondering if late night writing outside is still a good idea! Right now I’m typing the answers on my laptop at my usual seat on the back deck keeping one eye out for you know who. Sure is suspenseful anyway.

Pam: I like your protagonist John Madison. A reviewer called him rakish and with a past. I can handle rakish and we all like a bit of a bad boy. I know who I would cast if they made a movie. Is this something you do when you visualize your characters? Does it help to have a picture in mind when creating the people you will be spending a great deal of your time?

Dorothy:
Oh yes, always have the visual in mind, for characters, scenes, settings, for everything. John just flipped into my mind one day when I was first starting to think about writing The Witch. And his face was immediately clear. He’s of Turkish origin, dark hair and eyes, olive skin and has a smart looking close cut beard. But he doesn’t resemble any particular movie star I know.

Pam: You have picked a very volatile place to set your books. Did you choose Iraq as a destination with your interest in Mesopotamia or did your story evolve from that curiosity?

Dorothy:
My starting point was the Book of Genesis, and I quickly learned many of those stories were based on much earlier Mesopotamian myths. So I began to study Mesopotamian culture and history and fell in love with it. At the same time, the Iraq war broke out including the looting of the Iraq Museum and I was transfixed (and horrified) watching all this on television. It seemed that history had come full circle. Who would have imagined the sacking and burning of Mesopotamian cities in the 21st century? So I guess you could say, it was a bit of both.

Pam: I enjoy the detail you placed in John Madison’s travels. Did you visit all the countries and cities portrayed in your books? Is it necessary to do so to write about them?

Dorothy:
It is necessary although not always possible. Iraq was (and still is) too dangerous to visit. For Book two, I travelled to London and Naples and don’t think I could have written the book without being there.

Pam: Which author has the greatest influence in your own writing and who is a favourite?

Dorothy:
Cormac McCarthy is my absolutely top favourite followed closely by Lawrence Durrell. Of course there are many others. McCarthy`s writing although of a very different subject matter, is so stunningly lyrical and beautiful. I think his Border Trilogy is the best 20th century literary work I`ve ever read. I like Canadian writer Rawi Hage very much too.

Pam: Writing with my collaborator Liz is something both of us enjoy. Its not for everyone. Is this something you would ever consider?

Dorothy:
It takes a special talent to work with someone else and I applaud you both. Sure, I`d consider it, for the right project.

Pam: You managed to sidestep the tedious query and rejection letters that most authors deal with. Tell us how that came about?

Dorothy:
I entered the first 3000 words of my m.s. to the Debut Dagger competition (Crime Writers Association UK) for unpublished writers and was shortlisted. From there, several literary agents approached me and I began to work with one. Once we felt the book was ready we sold the trilogy to penguin Canada. I`ll be forever grateful to the Crime Writers Association for saving me from those slush piles.

Thanks Dorothy for spending the time with us today. We wish you much continued success with your Trilogy and look forward to book #3 in 2015.

Thank you both so very much; I really enjoyed your questions.............Dorothy 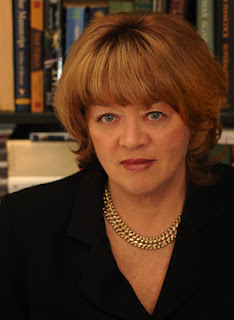 D.J. McIntosh's The Witch of Babylon has been sold in twenty countries, was shortlisted for the Crime Writers Association Debut Dagger Award, and won a Crime Writers of Canada Arthur Ellis Award for best unpublished novel. It was a national bestseller, an Amazon.ca Best Book, and was named one of CNN's Most Enduring Historical Thrillers. McIntosh is a member of the Canadian Society for Mesopotamian Studies. She is a strong supporter of Reporters Without Borders and the Committee to Protect Journalists. She lives in Toronto.

Good interview Pam. I really find this type of novel one of my favourite genres. I suspect I will look for both of these books next time I am looking to buy something new to read....

Michele, Your going to love these books. Character, plot and the premise of the story is very exciting.