That’s what moving house does to a body. Downsizing from a 2800 square foot house to a 2 bedroom apartment. Sorting and tossing, wrapping and giving away…and it never seems to end. I suppose getting older doesn’t help either! The last time I prepared for a move I wasn’t working full time and had the luxury of energy during the day to devote to the organizing and cleaning. Not to be this time!

Work is very stressful right now (do I sound like a broken record??) and so I find there is no peaceful interlude. Eight plus hours of slogging away mentally during the day, followed by an almost comatose drive home afterward. A quick bite to eat and then trying to get at least two hours worth of packing done before falling - totally wiped out - into bed…where the brain then kicks into gear and reminds you of a million and one things that still need to be done.

And amidst all this chaos runs the thought “you need to be writing…Maddy needs to get finished” Where is a good clone when you need one? I’m really looking forward to setting up my writing room and have organized it quite nicely…in my imagination! More room to spread out and be motivated to make the final push towards completion of Madelaine.

Speaking of writing reminds me that within a day or two I will need to disconnect myself from cyber-space – and will be anxious to ensure my computer survives the move and will re-connect smoothly at the new address. Much to my chagrin I learned my current internet level of service is not available in the same high speed format that I enjoy now and I’ve been downgraded to one level lower. Ask my co-author how happy I am about THAT little piece of news!

Well the pizza that was ordered for dinner this evening is almost gone, which signals I’d best turn my little-remaining energy to some more packing.

Before I forget I’d like to wish any American cousins visiting our site a very Happy and Blessed Thanksgiving!!

I hope to be back soon once I’m settled in my new abode, in the meantime, I’m sure Pam will keep you all up to date if need be!

God's gift to the literary world!!

Sunday evening and tearing my hair out writing query letters to agents. This is harder than writing the book. I have put it off as I am waiting for Liz and Peter to finish the edit. As soon as that is done this baby is launched. At least from us. To make my letter both interesting from the point of view of the book, and why you would want to read it, also let the agents know we are God's gift to the literary world is daunting.
However, having said that, we have come this far so I must persevere. I hope to have something to show Liz at work tomorrow.

I think we have decided in the New Year we won't take on any extra projects at work. We both have a habit of always staying involved but it takes it toll and we want to get on with the other book. Lots of ideas to keep that one going and hopefully a series. Liz will be settled in her new home and we can set up a better schedule of work.

I am convinced that no one talks more about the weather than Canadians. We had our first snowfall this week, even before all the leaves had fallen from the trees. It looked beautiful, for a while and then it was just a mess and freezing.
On my drive home from work on the first day, everyone was being very careful. I was driving on a major road that was under construction, widening the roadway. They tell you to stay at least three cars behind the car in front but I was at least six. The cars behind were a good distance away. Thank goodness.My heart started thumping and I think I was probably yelling to whomever, as the car had a life of it's own and started drifting sideways. The whole area was full of ditches that the workmen were filling and I saw myself just drifting into one of them.
Needless to say I managed to control the car and came to a stop right in front of six or eight workmen. It must have been the look on my face or my yelling but they all started to applaud.
I sheepishly grinned at them and slowly drove the rest of the way home without incident.

Since then we have just had a few flurries but its very cold but sunny. That makes a big difference.

Well my life has been saved so that I can be on the best seller list as Jamie Tremain. Save driving everyone. Talk soon.

Not many leaves left to fall and the car was covered in ice this morning. I like the changes in the seasons but I have to admit this is not my favourite.
The editing of Madelaine is coming along and is going as slow as I thought it would. I don't swear much but@#$%^&. However beggars can't be choosers and unpaid labour is hard to find. Liz is still packing boxes and sorting through a lifetime of memories . I don't envy her the work but before she knows it she will be settled again and can get back to the revisions I am waiting on.

In the meantime I have started a short story with the intent of sending it into The Toronto Star contest. We have given ourselves another deadline. As Liz hopes to be settled around the 5-10th December she hopes to be finished the revisions by the 19th. We will be sending it off over the Christmas holidays and then we will wait on the rejection letters!!!!

We are looking forward to getting back to Body Perfect and the completion of that book.
The New year should bring about a more structured writing routine with scheduled brainstorming sessions and writing weekends.

2009 we believe is going to be a big year for us so watch out all you Jamie Tremain fans. Thank you for sticking with us. We like to see comments on the blog on anything really so please share your ideas or thoughts with us.

The tree for lovers

Good morning,
It has been eight days between blogs and I apologize. Liz is still coughing but she is on the mend. She has had car troubles that are now fixed and she is on the hunt for new digs. What with her heavy commitment at work and all of the above it is no wonder she has not been writing. So we are in a bit of a slow down. My" in house" Editor is still editing, but slowly, and I might say very thoroughly, but oh does he like to procrastinate. Better not nag or it won't get finished.

Hope to start a short story today for a contest in the Toronto Star. Have the germ of an idea and now it's getting started.

The weather this last two weeks has been glorious and the trees magnificent, but I think it is all over.
The Linden tree or Bass wood outside my office window is on the wane and only has a few leaves left. It has been my barometer on the weather all year. It is called the Lime tree in Britain and is know as the' tree for lovers'. How appropriate for this house!!!Just in case you think I am really up on my trees, I Googled this information.
It has many medicinal properties and makes great honey. If this book is slow in selling then I have my tree to fall back on as a source of income!! My son is an arborist so I will pick his brain about my lovely tree. Let it be known here that when my time comes just plant a tree over my ashes. Not being morbid but never liked the thought of a big slab of marble on top of me.

I just heard from the other half of Jamie Tremain and she had a good lead on a new abode so that's encouraging. She says after a few chores today she will have a look at Madelaine again. She is very frustrated. In writing its important to keep the flow going or you loose the momentum.

My garden has been put to bed by the resident editor/gardener/artist/and stacker of dishes. Today he has an Art class at the local college. I will make a small suggstion when he gets home that he may want to relax with a book by a new Author called jamie Tremain. Do you think that will work?

Enjoy the w/e and talk soon.

Four weeks of coughing and NOW I get the head cold? Two doctor visits and a chest xray provide no information other than its probably a very stubborn virus and has to be waited out. I've never had a cough that's held on like this before. Seems to be on its way out and then returns with a vengeance....and just for more fun it seems a head cold is finally settling in. I see a trip to the drugstore for more cough and cold remedies and a ton of kleenex.

Pam has had a week of roller coaster emotions; she lost a sister in law very suddenly and is grieved that she is unable to make the trip to Scotland for the funeral - my prayers and sympathies are certainly with her and her family. Plus dealing with all the ongoing stresses at work.

But at least a highlight - she was able to chat with two favourite authors (Peter Robinson and Louise Penny) at a recent author's gathering down at Harbourfront in Toronto. And she was able to get Louise Penny to autograph my own copy of her latest book in the Gamache series, "The Murder Stone" - certainly now a prized possession of mine!


Pam had several photographs of her meeting with Louise, seen below. 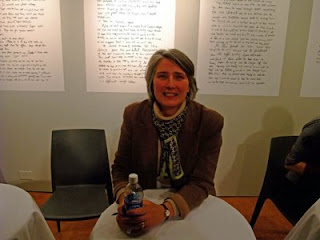 Unfortunately the photos taken of her and Pam didn't turn out all that well, but I'm going to post this one as the best of the lot: 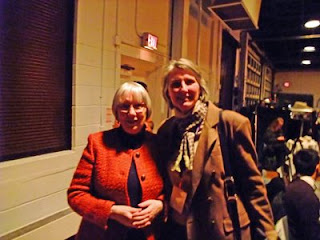 I wish I could have been there with Pam to meet Louise, but perhaps some day we will be able to meet at the launch of "Madelaine - Shadows and Light". Which of course is our priority to get finished ASAP!

Last night was Halloween, and like Pam, its not an event I care for. We did go over to our son's house to see the grandchildren's costumes: 5 year old Michael was a Transformer; brother Noah an adorable walking Pumpkin. 3 year old Makenna was a fetching Pirate Captain, with her curly blonde hair! and baby brother Max toddled about in a Turtle outfit.

Good news about today is that the clocks go back! Yeay - an extra hour of sleep...personally I just wish the powers that be would leave the time set at either Daylight Savings Time or standard time and be done with it!

Well enough rambling, time to get on with the day. Now where did I put that package of cough candies?