Today we’re very excited to have the award winning Ottawa crime writer Barbara Fradkin as our guest on Jamie Tremian. Since 1995 she has been a constant in the Crime writing world with her Inspector Green series. 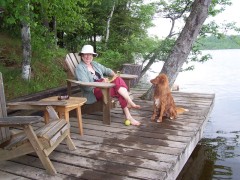 Barbara writing at her cottage. It's hard work being an author!

Pam: You are about to launch your ninth Inspector Green Mystery. What's the secret to his longevity?

Barbara:  In some ways, Green is an “everyman”. He’s not a superhero cop. in fact he’s not a very good cop; he hates his gun, chafes against rules, and balks at working within a team. He’s also not the classic fictional cliché; the rogue cop who’s divorced, alcoholic and living in a garret. Green has a wife and family, lives in a regular home with a yard and barbeque, and like many of us, he struggles to balance those demands with those of his job. In short, most readers can relate.
He is also not static. Over the course of the nine books, I have woven a back story involving his family and colleagues that is constantly evolving and changing, so that in each book Green faces new personal challenges in addition to the case. His relationships to his growing son, rebellious teenage daughter, an aging father, and injured and traumatized co-workers all add a humble touch.

Pam:  I see Inspector Michael Green as a maverick, albeit an unrealistic one. He seeks justice but tends to go against police protocol. A loose cannon. What is the attraction for us that our heroes sometimes step out of line and push the envelope?

Barbara: Fictional heroes go where we dare not go but wish we could. Green tilts at windmills and charges the barricades in the cause of justice. We are constrained by so much in our real lives. We usually prefer to live safely within the laws and expectations of society rather than risk losing our place in it, but sometimes that can be really frustrating, particularly when we see injustices. Fictional heroes rebel against their bosses and take on the bad guys in our name.

Pam:  Your affinity for the dark side is manifested in portrayals within your Inspector Green books – do you think we all have a ‘dark side’?

Barbara: Absolutely. I believe everyone is capable of homicide, given the right circumstances and the right motive.  That is what I find fascinating about writing crime novels. Mysteries explore what people do when they are desperate and pushed to the edge, what choices they make and how they cope with the aftermath.

Pam: Your twenty-five years as a child psychologist has given you a rare insight not many of us get into the human psyche. How much does this knowledge influence your work as an author?

Barbara: Being a psychologist influences my writing in many ways, from the themes I choose to the range of people I can write about. But probably the most powerful influence has been on my characters. Creating vivid characters is all about empathy. A writer has to be able to step into the head and slip into the skin of the character he is creating. Psychologists spend their lives trying to see the world from the other person’s point of view. Fictional people are no different.

Pam: Many authors use music in their prose to explain the nuances of their protagonist. Is Inspector Green partial to a particular genre of music?

Barbara: Green is a classic rock kind of guy, like me. Although he picks music to suit his mood, from soothing to rousing, he does tend towards rebellious but artistic rock. Often Canadian, like The Tragically Hip, The Tea Party, and Our Lady Peace . His daughter is trying to bring him into the twenty-first century.

Pam: I enjoyed reading your latest Rapid Read by ORCA featuring handyman Cedric O’Toole. Can you share with us the concept behind these books?

Barbara: Orca is a Canadian publisher well known for its children’s and YA books, and it has an established line of high-interest/ low vocabulary books for readers struggling in school.  But adults with literacy challenges or limited English skills had no similar books at their level, so Orca approached established mystery authors with a proposal to write entertaining, easy-read books that would grip readers from the first page.  Thus Rapid Reads was born. I created Cedric O’Toole as a character many of these readers who could identify with, a man with skilled hands but limited literacy who uses his inventive mind to solve mysteries.

Pam: How do you deal with facing a blank page and having no inspiration? Do you walk the dog, take to drink or just walk away until the muse strikes again?

Barbara: All of those things, plus a lot of swearing and muttering. Often I will set the story aside and do something mundane like walking the dog or emptying the dishwasher. In that time I am usually playing with questions. What if? What would so-and-so do next? Often asking what is the logical next thing to occur in a story, or what would this particular character do next, helps me come up with a way forward.

Pam: I read in your bio that you’ve been writing since you were six. Who was your biggest influence or favourite author growing up?

Barbara: I grew up in a house absolutely crammed with books, all jumbled on shelves in seemingly senseless disorder. When we children were young my parents would read us chapters from the classics like Dickens and L.M. Montgomery. Loved all the Anne books. When I could read well enough by myself I started browsing the shelves in the house at random, reading Russian novelists along with American and Canadian classics like Faulkner and MacLennan. The books that stuck with me were those with powerful characters with moral struggles. The Russians were great for that.

Pam:  Research is important for any book. Do you feel it’s necessary to visit the place your characters inhabit?

Barbara: To create the most vivid impression of the place, including the sounds and smells, it’s far better to visit the place or someplace very similar. If that’s not possible, research it from as many angles as possible, including interviewing people, reading books, and scouring the internet. Luckily the internet has revolutionized writing. I was able to Google the Nahanni River on YouTube and get videos of canoeists running specific rapids, complete with screams. The next best thing to being there.

Pam: Aspiring writers like Jamie Tremain live in constant anticipation of their book being accepted for publication. Do you have any ‘words of wisdom’ for these newbies to the publishing world?

Barbara: Write the next book, and try to make it even better. I wrote several really bad books before I wrote the first one that got published. I didn’t know they were bad at the time, but trust me, I am extremely grateful now that no one published them. I was complaining once about getting rejected, and my good friend Mary Jane Maffini said to me “You will get published, Maybe you haven’t yet written the book yet that will get published.” Thank you, Mary Jane.

Pam: One last question. Your event calendar is pretty full this year. Do you enjoy the marketing of your books and being on the road? And when do you find time for Barbara?

Barbara: Sometimes I don’t! But getting out of my garret to meet the readers who enjoy my books are a terrific source of energy and inspiration.  Finding a balance is a challenge, however. And when writing a first draft, as I am now, I also have to write for several hours a day in order to keep up the momentum. But this isn’t really any different from my years when I raised three children while working full time, driving in car pools, getting the shopping done, etc. In short, coping with the demands and pace that most of us live our lives. Relaxing with a glass of wine at the end of the day while watching a great BBC drama is often enough to recharge the batteries.

Pam: Thanks Barb for spending the time with us on Jamie Tremain-Remember the Name. We wish you much success with your latest ‘The Whisper of Legends’. 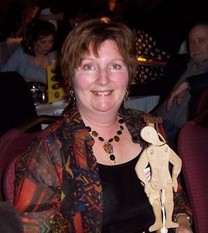 Barbara Fradkin
Barbara Fradkin was born in Montreal and attended McGill and the Universities of Toronto and Ottawa, where she obtained her PhD in clinical psychology. Her work as a child psychologist provided ample inspiration for plotting murders, until she retired from practice to spend more time with her pen and her fertile imagination. Her dark short stories haunt numerous magazines and anthologies, including the Ladies Killing Circle series, and she also writes an easy-read novella series for Orca Books. However, she is best known for her award-winning detective series, featuring the exasperating, quixotic Ottawa Police Inspector Michael Green whose passion for justice and love of the hunt often interferes with family, friends, and police protocol. Two of these novels have won the Arthur Ellis Award for Best Canadian Crime novel.

We aim to please.Stay tuned for May's interview with Victoria Abbott AKA Mary Jane Maffini and Victoria Maffini.