June - still feels like the end of a school year, holding the anticipation of summer-long freedom from books and exams. Birds chirp the loudest, the greenery is lush and the days are longer. The fragrance of  freshly mowed grass is a welcome return. (Apologies to those with allergies) Maybe a summer vacation to anticipate adds to the joy of June. And winter seems so far away! 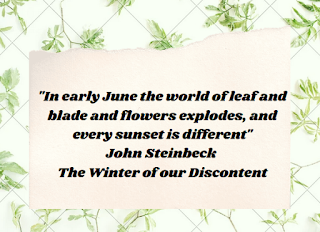 One of my favourite authors! I read "That Night" several years ago and was thoroughly engaged by her style of writing. So, I recently downloaded "Still Missing", not realizing it was her debut novel. What a non-stop read!  I was hooked from the very first page and went along for the ride with Annie O'Sullivan as she relived her abduction and captivity at the hands of a psychopathic monster. A brilliant tale, which I read in two sittings. It was so hard to put down.
How the abduction affected not only Annie but her family and friends make this a book that touches base on all our human emotions. No wonder Chevy Stevens is a New York Times Bestseller!

When I was a teenager I loved gothic horror stories. The creepier the better. And I hoped this one would deliver, but sadly, I think it fell short. While there was gothic terror combined with daring science and technology of 1894 England, in my opinion, it lacked substance.

The protagonist is a young housemaid, Shirley Dobbins, employed with the Avondale family. Content enough with her station in life, her world quickly changes when she finds herself working at The Hunting Lodge, an estate outside of London, England after a family tragedy renders the Avondale heirs orphans. A mysterious uncle, Sir Joseph Hunting, comes to take his niece and nephew to live with him at his estate - Hunting Lodge. Shirley accompanies them.

She becomes involved with the baronet’s mysterious scientific project, while at the same time contending with romantic interest from Griffin Avondale.  Terrifying visions and apparitions haunt the Lodge and Shirley must put the pieces of the puzzle together to save herself and others.

During the story, Shirley’s ties with Jack the Ripper add another layer to the ghastly and gruesome events unfolding at Hunting Lodge.

The story premise is good, but it felt rushed, with not enough time spent building the gloomy, eerie suspense I had hoped for.

Still, if you like hideous scenes of gore, and an underlying awkward romance this might be for you.

"June is bustin' out all over."

I loved singing this song at the top of my lungs. From the Rogers and Hammerstein’s musical -Carousel . I was with an amateur theatre group in my teens and this was one of my favourites as we attempted to put on the musical.

June is certainly bustin' out in the garden and it feels long overdue. The Magnolia and other tree blossoms are superb this year. Rhododendrons and all manner of green popping up.

I married in June and arrived in Canada in June to see the world, but here I've lived for the last fifty-six years. Stop doing the math!

June 2007 is also a significant year. Liz and I started on our collaborative journey as Jamie Tremain that year. So what do we have in store for this June to celebrate our fifteen years of working together? 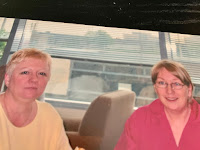 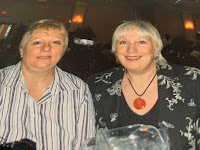 We were still blondes when we started out!

A patio for lunch overlooking Lake Ontario and making plans to publish book #6. The third in our Grant's Crossing series. Editing, rewriting, beta readers' input and formatting our new baby - Acting Off-Script - A Grant's Crossing Story. We'll also decide on a book cover design with our designer extraordinaire, Jennifer Gibson.
Stay tuned for  updates on the publication date.
May 24th-28th
I attended the virtual Maple Leaf Mystery Conference last week. Liz had other plans so we'll watch the recordings together. Always eager to learn new things and listen to my fellow authors from Crime Writers of Canada.
It was great to see both old friends from past live conferences and new authors participating. There was something for everyone so kudos to the organizers of this event. I saw many familiar faces amongst the moderators and interviewers.
A star-studded lineup shared their writing life. Maureen Jennings of  Murdoch Mysteries fame and Ian Rankin, who hails from my hometown of Edinburgh. I'm a big fan of his REBUS books and his favourite pub the Oxford bar. That's Rebus's favourite bar, I'm not sure about Ian.
Saturday afternoon was our very own Canadian maestro, Vicki Delany, the prolific author of 40 books.  Listening to her speak about her writing process was fascinating, but daunting. Very good interview.
Check their web pages and links for more information.
As awesome as this virtual platform is my hope is for a live conference in the future.
Chat in July.

And only because it's June, here's an appropriately themed quick and easy recipe - and oh..one which will NEVER be served at any Jamie Tremain function! However, if you might be a fan, do let us know!

Honestly, this is a serious recipe but I couldn't resist some commentary.
Cheers?
Pam's having the last word...Yuck and more Yuck!

I knew those were June bugs! Hard pass!