These monthly interviews have a mixture of authors with very different styles of writing and genres from cosy mysteries to police procedural, crime farce and suspense. Today’s victim at Jamie Tremain is Rob Brunet, a NOIR writer of published short stories. Check his blog www.robbrunet.com/‎ or find him on Twitter @RRBrunet 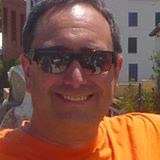 Thanks Rob for agreeing to answer some questions about your writing life and giving us a perspective of your recent trip to Bouchercon, www.bouchercon.info/‎ in Albany NY. This is the premiere world conference for all readers and writers of crime fiction. It’s taking place in Long Beach CA in 2014. I’d better start saving now.

Pam:
What attracts you to the Noir style of writing? You seem like a kind, mild mannered family man to me. Where do all those dark thoughts come from?

Rob:
I’ve always had a pretty dark sense of humour, and it spills over into my writing, even when the subject is “serious”. Compared to a lot of noir authors, my work is pretty tame, though. Especially my longer work.
I’m a pretty big believer in Yin and Yang. If there’s a dark side to something, there pretty much has to be a light side, too.
A habit I developed as a kid was to imagine the worst possible outcome in a given situation. I’d inhabit it and convince myself that was what was going to happen. I figured if I thought it through and worked out all the impossibly bad details, whatever actually happened wouldn’t be as harsh as whatever I’d dreamt up. It usually worked. (Still does, sometimes.)

Pam:
Do we all have a dark side?

Rob:
Ha! You tell me, Pam.
Seriously, though, I imagine most people have surprised themselves at one time or another by things they have done that are “bad”, whatever that means. And if you pull back from that to just the things we’ve all dreamt of doing... well, there’s all kinds of lines that people will cross in their mind, I think.

Pam:
Has noir film influenced your work and do you have a favourite?

Rob:
Whenever I’m asked for a favourite, I’m always afraid I’ll remember a more favourite one immediately after. But there are a few movies that really evoke the feeling I am going for in my writing. Fargo is probably foremost among them. The Coen brothers turned the genre on its head, following Jerry Lundegaard’s desperate descent into a personal hell pretty much of his own making.
Guy Ritchie’s films are also regular fare for me. I watch Snatch a few times a year.
Sexy Beast is another favorite, but then I could watch Ben Kingsley smoke cigarettes all night.
(Complete aside: Kingsley just finished filming a Sarah Kernochan movie opposite Patricia Clarkson, called Learning to Drive. It won’t come out until October 2014, but I’m sure it’ll be a gem. Kernochan wrote the screenplay for 9 ½ Weeks. Somehow I think Learning to Drive will be a little tamer, and maybe even have a bit more dialogue.)

Pam:
How long have you been writing and do you have a favourite author?

Rob:
It’s been said before, but I’ve been writing pretty much my whole life. I’ve got poems from Grade 2 with the teacher’s red ink asking whether we had a future Dr. Seuss in the class. (I must’ve taken her one helluva red apple.) That carried on right through school and I always expected to write, but I got distracted by digital media for a couple decades. I just couldn’t shake it. Finally, I gave in to the muse, and I’ve never been happier with how I spend my time.

I have lots of favourite authors, and they’re quite different one from the other. Carl Hiaasen, John Irving, Margaret Atwood (especially her early books), and Thomas Hardy are all front row. David Adams Richards stuns me with his depiction of living rough in the Miramichi in New Brunswick. When I first read him I couldn’t believe he was describing life in the seventies in the same country I’d grown up in. It sounded more like JUDE THE OBSCURE, his characters take such a beating.

Pam:
Do you have a work in progress? Another short story or have you started a novel?

Rob:
My first novel STINKING RICH is out on submission. It’s rural noir based in the Kawarthas. I’m working on another to follow it, as well as a novella in an urban setting.
The next short story I have coming out will be up on Shotgun Honey later this month. Earlier this year, they published “Rickie’s Pig”. I love the fact they limit you to 700 words. You’ve got to get character, setting, and story so sharp it hurts. A lot of their writers go real dark real quick.

Pam:
With a background in I.T. what is your favourite communication device?

Rob:
Smartphones. I’ve become a huge Android fan. I can do pretty much everything anywhere anytime.

Pam:
Blogging, FB, twitter. Is it important to be on all platforms in this day of instant communication?

Rob:
I probably spend way too much time on line. The reality is doing one or two platforms well is probably all you need. That said, I have made some very good (and ultimately close) friends on Twitter. So it’s definitely not all work.

Pam: Was this your first time attending Bouchercon? Can you give us peek at the crème de la crème of conferences? We want all the gossip, who you met, who gave you inspiration and is this a convention you would recommend to unpublished writers like Jamie Tremain?

Rob:
I’m just gonna gush if I start talking Bouchercon here, Pam. Isn’t there a word limit for guest posts? I did blog about it: Bouchercon Blast if your readers are curious.
I will say this, though. Everyone I met there (and I met a lot of people) absolutely raved about the convention, talked about how often they go, and committed to be there next year. I know I will be.

Pam:
I have one last question Rob. Something I ask all who sit on the ‘hot seat’ here.
Have you ever collaborated with another writer or would you consider doing so?

Rob:
I tried it a couple of times with two different friends years ago. Both were strong story ideas, and I think our writing styles meshed well enough. The problem was discipline. The two right people can motivate each other and keep the creative juices going. (It sure sounds like you and Liz do that!) The two wrong people just get together, talk about the story, and enjoy good food and drink. I fell into the latter camp.